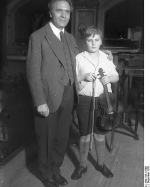 Yehudi Menuhin, Baron Menuhin, OM, KBE was a Jewish American violinist and conductor who spent most of his performing career in the United Kingdom. He was born to Jewish parents in the United States, but became a citizen of Switzerland in 1970, and of the United Kingdom in 1985. He is commonly considered one of the twentieth century’s greatest violin virtuosi.

Yehudi Menuhin was born in New York City, New York, to Bielorussian Jewish parents from what is now Belarus. His sisters were the concert pianist and human rights worker Hephzibah Menuhin and the pianist, painter, and poet Yaltah Menuhin. Through his father Moshe Menuhin, a former rabbinical student and anti-Zionist writer, Menuhin was descended from a distinguished rabbinical dynasty.

Menuhin began violin instruction at age four under violinist Sigmund Anker; his parents had wanted Louis Persinger to be his teacher, but Persinger refused. He displayed extraordinary talents at an early age. His first solo violin performance was at the age of seven with the San Francisco Symphony in 1923. Persinger then agreed to take Menuhin as a student. When the Menuhins went to Paris, Persinger suggested Yehudi go to his own teacher, Eugène Ysaÿe. He did have one lesson with Ysaÿe, but did not like his method or the fact that he was very old. Instead, he went to the Romanian composer and violinist George Enescu, after which he made several recordings with his sister Hephzibah. He was also a student of Adolf Busch. In 1929 he played in Berlin, under Bruno Walter’s baton, three concerti by Bach, Brahms and Beethoven. In 1932, he recorded Edward Elgar’s Violin Concerto in B minor for HMV in London, with the composer himself conducting, and between 1934 and 1936 he made the first integral recording of Johann Sebastian Bach’s Sonatas and Partitas for Solo Violin.

Yehudi Menuhin performed for allied soldiers during World War II, and went with the composer Benjamin Britten to perform for inmates of Bergen-Belsen concentration camp, after its liberation in April 1945. He returned to Germany in 1947 to perform with the Berlin Philharmonic Orchestra under the baton of conductor Wilhelm Furtwängler as an act of reconciliation, becoming the first Jewish musician to do so following the Holocaust. He said to critics within the Jewish community that he wanted to rehabilitate Germany’s music and spirit. After building early success on richly romantic and tonally opulent performances, he experienced considerable physical and artistic difficulties caused by overwork during the war as well as unfocused and unstructured early training. Careful practice and study combined with meditation and yoga helped him overcome many of these problems. His profound and considered musical interpretations are nearly universally acclaimed. When he finally resumed recording, he was known for practising by deconstructing music phrases one note at a time.