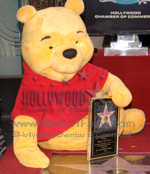 The Boulevard was Buzzing as Winnie The Pooh Celebrated 80th Anniversary with 2,308th Star on The Hollywood Walk Of Fame
Honorary Mayor of Hollywood Johnny Grant presided over the ceremony
Guest included Robert Iger, President and CEO of The Walt Disney Company
6834 Hollywood Boulevard on Tuesday, April 11, 2006

For over 80 years, Winnie the Pooh has grown to be one of the most cherished characters within the world of entertainment. He was born in 1925 in the imagination of author A.A. Milne, who captured his son’s love of a stuffed bear in his first Pooh story published in the London Evening News. His first appearance on the big screen was in 1966 in the Disney featurette -“Winnie the Pooh and the Honey Tree.” Pooh’s popularity has only continued to touch the hearts and minds of children of all ages through films, books, DVD’s consumer products, live shows, theme park attractions and television around the world. No other character captures the true essence of childhood as much as the loveable bear who is a symbol to the child in all of us.

On the same day as the Walk of Fame ceremony, Walt Disney Home Entertainment will be releasing out of the fabled Disney Vault, “Pooh’s Grand Adventure-The Search for Christopher Robin,” for the first time ever, digitally re-mastered, on DVD.

Winnie the Pooh is one of a select few animated characters to be honored with a star on the Hollywood Walk of Fame-an honor that is perfectly timed to the global 18-month long Pooh anniversary celebration Disney kicked off in December 2005 which includes new entertainment and special-edition product in honor of Winnie the Pooh. Disney has also created Pooh Friendship Wishbands to benefit the Make-a-Wish Foundation and encourage the public to ” be a star in the life of a child.” The Wishbands help to spread the Pooh message of friendship and will be sold on WinniethePooh.com.