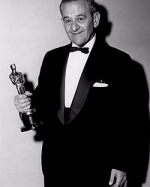 William Wyler was a leading American motion picture director, producer, and screenwriter. He was regarded as second only to John Ford as a “master craftsman of cinema.”

Notable works included Ben-Hur, The Best Years of Our Lives, and Mrs. Miniver, all of which won Wyler Academy Awards for Best Director, and also won Best Picture. He earned his first Oscar nomination for directing Dodsworth in 1936, starring Walter Huston and Mary Astor, “sparking a 20-year run of almost unbroken greatness.”

Film historian Ian Freer calls Wyler a “bona fide perfectionist,” whose penchant for retakes and an attempt to hone every last nuance, “became the stuff of legend.” His ability to direct a string of classic literary adaptations into huge box-office and critical successes made him one of “Hollywood’s most bankable moviemakers” during the 1930s and 1940s.

Other popular films include Funny Girl, How to Steal a Million, The Big Country, Roman Holiday, The Heiress, The Letter, The Westerner, Wuthering Heights, Jezebel, Dodsworth, A House Divided, and Hell’s Heroes .