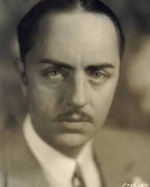 William Horatio Powell was an American actor, noted for his sophisticated, cynical portrayals.

A major star at MGM, he was paired with Myrna Loy in fourteen films, including the popular Thin Man series in which Powell and Loy played Nick and Nora Charles. He was nominated for the Academy Award for Best Actor three times, for The Thin Man, My Man Godfrey and Life with Father. Powell, an only child, was born in Pittsburgh, Pennsylvania, to Nettie Manila and Horatio Warren Powell. He showed an early aptitude for performing. In 1907, he moved with his family to Kansas City, Missouri where he graduated from Central High School in 1912. The Powells lived a few blocks away from the Carpenters, whose daughter

Harlean evolved into Jean Harlow, although Powell would not meet her until both