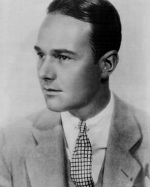 Charles William “Billy” Haines was an American film actor and interior designer. A star of the silent era, Haines’ career was cut short in the Thirties as a result of his refusal to deny his homosexuality.

Haines was probably born on January 2, 1900, the third child of George Adam Haines, a cigar maker, and Laura Virginia Haines. Two older siblings died in infancy. He had four younger siblings: Lillian, born in 1902; Ann, born in 1907; George, Jr., born in 1908; and Henry, born in 1917. He was baptized at the Trinity Episcopal Church in Staunton at the age of eight, where he later sang in the choir. He became fascinated with stage performance and motion pictures at an early age, spending hours watching early silent films in the local theatres.

Haines ran away from home at the age of 14, accompanied by another unidentified young man whom Haines referred to as his “boyfriend”. The pair went first to Richmond and then to Hopewell, which had a reputation for immorality. Haines and his boyfriend got jobs working at the local DuPont factory, producing nitrocellulose for $50 a week. To supplement their income, the couple opened a dance hall, which may have also served as a brothel. His parents, frantic over his disappearance, tracked him through the police to Hopewell. Haines did not return home with them, remaining instead in Hopewell and sending money back home to help support the family. The couple remained in Hopewell until most of the town was destroyed by fire in 1915. Haines moved to New York City. It is unclear whether his boyfriend accompanied him. Following the bankruptcy of the family business and the mental breakdown of George, Sr., the family moved to Richmond in 1916. Haines returned home in 1917 to help support them. With his father recovered and employed, Haines returned to New York City in 1919, settling into the burgeoning gay community of Greenwich Village. He worked a variety of jobs and was for a time the kept man of an older woman before becoming a model. Talent scout Bijou Fernandez discovered Haines as part of the Samuel Goldwyn Company’s “New Faces of 1922” contest and the studio signed him to a $40 a week contract. He traveled to Hollywood with fellow contest winner Eleanor Boardman in March of that year.

Haines’s career began slowly, as he appeared in extra and bit parts, mostly uncredited. His first significant role was in Three Wise Fools. He attracted positive critical attention and the studio began building him up as a new star. However, he continued to play small, unimportant parts at Goldwyn. It was not until his home studio loaned him to Fox in 1923 for The Desert Outlaw that he got the opportunity to play a significant role. In 1924, MGM lent Haines to Columbia Pictures for a five-picture deal. The first of these, The Midnight Express, received excellent reviews and Columbia offered to buy his contract. The offer was refused and Haines continued in bit roles for Goldwyn. Haines scored his first big personal success with Brown of Harvard opposite Jack Pickford and Mary Brian. It was in Brown that he crystallized his screen image, a young arrogant man who is humbled by the last reel. It was a formula to which he was repeatedly returned for the next several years.