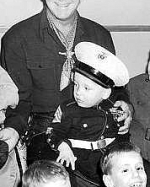 Boyd was born in Hendrysburg in Belmont County, located 26 miles east of Cambridge, Ohio. He was reared in Tulsa, Oklahoma, the son of day laborer Charles William Boyd and his wife, the former Lida Wilkens. Following his father’s death, he moved to California and worked as an orange picker, surveyor, tool dresser, and auto salesman. In Hollywood, he found extra work in films like Why Change Your Wife?. During World War I, he enlisted in the army but was exempted because of a “weak heart.” More prominent film roles followed, and he became famous as a leading man in silent film romances with a yearly salary of $100,000. He was the lead actor in Cecil B. DeMille’s The Volga Boatman and in D. W. Griffith’s Lady of the Pavements. Radio Pictures ended Boyd’s contract in 1931 when his picture was mistakenly run in a newspaper story about the arrest of another actor, William “Stage” Boyd, on gambling and liquor charges. Having been reckless with his money, Boyd was broke and without a job.

In 1935 he was offered the supporting role of Red Connors in the movie Hop-Along Cassidy, but asked to be considered for the title role and won it. The original Hopalong Cassidy character, written by Clarence E. Mulford for pulp fiction, was changed from a hard-drinking, rough-living wrangler to its eventual incarnation as a cowboy hero who did not smoke, drink or swear and who always let the bad guy start the fight. Although Boyd “never branded a cow or mended a fence, cannot bulldog a steer”, and disliked western music, he became indelibly associated with the Hopalong character and, like rival cowboy stars Roy Rogers and Gene Autry, gained lasting fame in the Western film genre. The Hopalong Cassidy series ended in 1947 after 66 films, with Boyd producing the last 12.