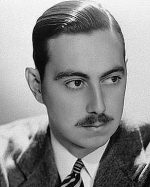 Willard Lewis Waterman was a character actor in films, TV and on radio, remembered best for succeeding Harold Peary as the title character of The Great Gildersleeve at the height of that show’s popularity.

Peary was unable to convince sponsor and show owner Kraft Cheese to allow him an ownership stake in the show. Impressed with better capital-gains deals CBS was willing to offer performers in the high-tax late 1940s, he decided to move from NBC to CBS during the latter’s famous talent raids. Kraft, however, refused to move the show to CBS and hired Waterman to replace Peary as the stentorian Throckmorton P. Gildersleeve.

Waterman attended the University of Wisconsin in the mid-1930s, where he acted in student plays and was a friend of Uta Hagen. He also began his radio career in Madison, and came to NBC in Chicago in early 1936. There he met and replaced Peary on The Tom Mix Ralston Straight Shooters. Not only did the two men become longtime friends, but Waterman ? who actually looked as though he could have been Peary’s sibling, and whose voice was a near-match for Peary’s ? refused to appropriate the half-leering, half-embarrassed laugh Peary had made a Gildersleeve trademark. He stayed with The Great Gildersleeve from 1950 to 1957 on radio and in an ill-fated television version syndicated in 1955.

At the same time he was heard as Gildersleeve, Waterman had a recurring role as Mr. Merriweather in the short-lived but respected radio comedy vehicle for Ronald Colman and his wife Benita Hume, The Halls of Ivy. Waterman’s pre-Gildersleeve radio career, in addition to Tom Mix, had included at least one starring vehicle, a short-lived situation comedy, Those Websters, that premiered in 1945. He also had radio roles between the mid-1930s and 1950 on such shows as Chicago Theater of the Air and Harold Teen, plus four soap operas: Girl Alone, The Guiding Light, Lonely Women, The Road of Life and Kay Fairchild, Stepmother. He is also remembered for his role as Claude Upson in the 1958 film Auntie Mame.