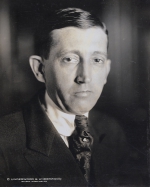 About
Will H. Hays

William Harrison Hays, Sr., was the namesake of the Hays Code for censorship of American films, chairman of the Republican National Committee and U.S. Postmaster General from 1921 to 1922.

Hays was born in Sullivan, Indiana. He was the manager of Warren G. Harding’s successful campaign for the Presidency of the United States in the 1920 election and subsequently was appointed by Harding as Postmaster General. After a year in office, he resigned to become the choice of the Hollywood movie studios to become the first president of the Motion Picture Producers and Distributors of America until he retired in 1945. In the postwar period, this organization would be renamed the Motion Picture Association of America. Hays resigned his cabinet position on January 14, 1922, in order to become the President of the Motion Picture Producers and Distributors of America shortly after the organization’s founding. He began his new job, at a $100,000 annual salary, on March 6 of that year. The goal of the organization was to renovate the image of the movie industry in the wake of the Roscoe “Fatty” Arbuckle rape and murder scandal and amid growing calls by primarily Protestant groups for federal censorship of the movies. Hiring Hays to “clean up the pictures” was, at least in part, a public relations ploy and much was made of his conservative credentials, including his roles as a Presbyterian deacon and past chairman of the Republican Party.