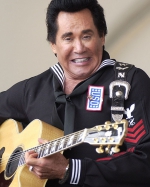 Wayne F. Newton is an American singer and entertainer based in Las Vegas, Nevada. He performed over 30,000 solo shows in Las Vegas over a period of over 40 years, earning him the nickname Mr. Las Vegas. His well known songs include 1972's "Daddy Don't You Walk So Fast", "Years", and his vocal version of "Red Roses for a Blue Lady". He is best known for his signature song, "Danke Schoen". Newton was born Carson Wayne Newton' in Norfolk, Virginia to Evelyn Marie "Smith" and Patrick Newton, who was an auto mechanic. His father was of Irish-Powhatan descent and his mother of German-Cherokee ancestry. While his father was in the U.S. Navy, Newton spent his early childhood in Roanoke, learning the piano, guitar, and steel guitar at the age of six.

When Wayne was a child performer he had to dye his hair blonde so he would be accepted by the public.

While Newton was still a child, his family moved to a home near Newark, Ohio. He began singing in local clubs, theaters, and fairs with his older brother, Jerry. Because of his connection with Newark, the city selected Newton to be the grand marshal of its bicentennial parade in 2002. Wayne's severe asthma forced the family to move to Phoenix, Arizona in 1952, where he later attended North High School. The brothers, as the Rascals in Rhythm, appeared with the Grand Ole Opry roadshows and on ABC-TV's Ozark Jubilee; and performed for the president and auditioned unsuccessfully for Ted Mack's Original Amateur Hour.