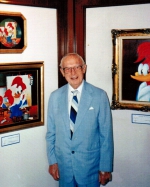 Lantz was born in New Rochelle, New York to Italian immigrant parents, Francesco Paolo Lantz and Maria Gervasi. According to Joe Adamson’s biography, The Walter Lantz Story, Lantz’s father was given his new surname by an immigration official who Anglicized it. Walter Lantz was always interested in art, completing a mail order drawing class at age twelve. He saw his first animation when he watched Winsor McCay’s cartoon short, Gertie the Dinosaur.

While working as an auto mechanic, Lantz got his first break. A wealthy customer named Fred Kafka liked his drawings on the garage’s bulletin board and financed Lantz’s studies at the Art Students League. Kafka also helped him get a job as a copy boy at the New York American, owned by William Randolph Hearst. Lantz worked at the newspaper and attended art school at night.

By the age of 16, Lantz was working in the animation department under director Gregory La Cava. Lantz then worked at the John R. Bray Studios on the Jerry On The Job series. In 1924, Lantz directed, animated, and even starred in his first cartoon series, Dinky Doodle. He moved to Hollywood, California in 1927, where he worked briefly for director Frank Capra and was a gag writer for Mack Sennett comedies.