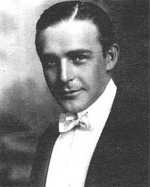 Wallace Reid was an actor in silent film referred to by Motion Picture Magazine as “the screen’s most perfect lover”.

Born William Wallace Reid in St. Louis, Missouri into a show business family, his mother Bertha Westbrook was an actress and his father, Hal Reid, worked successfully in a variety of theatrical jobs, travelling the country. As a boy, Wallace Reid was performing on stage at an early age but acting was put on hold while he obtained an education at Freehold Military School in Freehold Township, New Jersey. Reid actually graduated from Perkiomen Seminary in Pennsburg, Pennsylvania in 1909. A gifted all-around athlete, Reid participated in a number of sports while also following an interest in music, learning to play the piano, banjo, drums, and the violin. As a teenager, he spent time in Wyoming where he learned to be an outdoorsman.

Reid was drawn to the burgeoning motion picture industry by his father, who would shift from the theatre to acting, writing, and directing films. In 1910, Reid appeared in his first film, The Phoenix, an adaptation of a Milton Nobles play filmed at Selig Polyscope Studios in Chicago. Reid used the script from a play his father had written and approached the very successful Vitagraph Studios hoping to be given the opportunity to direct. Instead, Vitagraph executives capitalized on his sex appeal and in addition to having him direct, they cast him in a major role. Although Reid’s good looks and powerful physique made him the perfect “matinee idol,” he was equally happy with roles behind the scenes and often worked as a writer, cameraman, and director.

Wallace Reid appeared in several films with his father and, as his career in film flourished, he was soon acting and directing with and for early film mogul Allan Dwan. In 1913, while at Universal Pictures, Reid met and married actress Dorothy Davenport. He was featured in both Birth of a Nation and Intolerance both directed by D.W. Griffith, and starred opposite leading ladies such as Florence Turner, Gloria Swanson, Lillian Gish, Elsie Ferguson, and Geraldine Farrar en route to becoming one of Hollywood’s major heartthrobs.