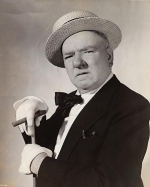 William Claude Dukenfield, better known as W. C. Fields, was an American comedian, actor, juggler and writer. Fields created a comic and hard-drinking egotist who remained a sympathetic character despite his snarling contempt for dogs, children, and women.

The characterization he portrayed in films and on radio was so strong it became generally identified with Fields himself. It was maintained by the movie-studio publicity departments at Fields’s studios and further established by Robert Lewis Taylor’s 1949 biography W.C. Fields, His Follies and Fortunes. Beginning in 1973, with the publication of Fields’s letters, photos, and personal notes in grandson Ronald Fields’s book W.C. Fields by Himself, it has been shown that Fields was married, and he financially supported their son and loved his grandchildren.

However, Madge Evans, a friend and actress, told a visitor in 1972 that Fields so deeply resented intrusions on his privacy by curious tourists walking up the driveway to his Los Angeles home that he would hide in the shrubs by his house and fire BB pellets at the trespassers’ legs. Groucho Marx told a similar story on his live performance album, An Evening with Groucho.

Fields was born William Claude Dukenfield in Darby, Pennsylvania. His father, James L. Dukenfield, was from an English-Irish Catholic family that immigrated to America from Sheffield, England in 1854. James Dukenfield served in Company M of the 72nd Pennsylvania Infantry Regiment in the American Civil War and was wounded in 1863. Fields’s mother, Kate Spangler Felton, 15 years younger than her husband, was a Protestant of German ancestry. The 1876 Philadelphia City Directory lists James Dukenfield as a clerk. After marrying, he worked as an independent produce merchant and a part-time hotel-keeper.