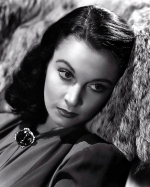 Vivien Leigh, Lady Olivier was an English actress. She won two Best Actress Academy Awards for playing "southern belles": Scarlett O'Hara in Gone with the Wind and Blanche DuBois in A Streetcar Named Desire, a role she had also played on stage in London's West End.

She was a prolific stage performer, frequently in collaboration with her then-husband, Laurence Olivier, who directed her in several of her roles. During her 30-year stage career, she played roles ranging from the heroines of Noël Coward and George Bernard Shaw comedies to classic Shakespearean characters such as Ophelia, Cleopatra, Juliet and Lady Macbeth.

Lauded for her beauty, Leigh felt that it sometimes prevented her from being taken seriously as an actress. However, ill health proved to be her greatest obstacle. For much of her adult life Leigh dealt with bipolar disorder. She earned a reputation for being difficult to work with, and her career suffered periods of inactivity. She also suffered recurrent bouts of chronic tuberculosis, first diagnosed in the mid-1940s. Leigh and Olivier divorced in 1960, and she worked sporadically in film and theatre until her death from tuberculosis in 1967.

Leigh was born Vivian Mary Hartley in Darjeeling, Bengal Presidency, British India, to Ernest Hartley, a British Officer in the Indian Cavalry, and Gertrude Robinson Yackje. Leigh's parents were married in Kensington, London, in 1912. In 1917, Ernest Hartley was transferred to Bangalore, while Gertrude and Vivian stayed in Ootacamund. Vivian Hartley made her first stage appearance at the age of three, reciting "Little Bo Peep" for her mother's amateur theatre group. Gertrude Hartley tried to instill in her daughter an appreciation of literature and introduced her to the works of Hans Christian Andersen, Lewis Carroll, and Rudyard Kipling, as well as stories of Greek mythology and Indian folklore. An only child, Vivian Hartley was sent to the Convent of the Sacred Heart in Roehampton, England, in 1920 at the age of six-and-a-half. One of her friends at the convent school was the future actress Maureen O'Sullivan, to whom she expressed her desire to become "a great actress".