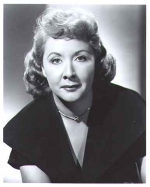 Vivian Vance was an American award winning television and theater actress and singer. Often referred to as ?TV?s most beloved second banana,? she is best known for her role as Ethel Mertz, sidekick to Lucille Ball on the American television sitcom I Love Lucy, and as Vivian Bagley on The Lucy Show.

Born Vivian Roberta Jones in Cherryvale, Kansas, Vance was the second of six children born to Robert Jones and Euphemia Ragan. When she was six years old her family moved to Independence, Kansas, where she eventually began her dramatic studies at Independence High School under the tutelage of Anna Ingleman, the drama instructor. William Inge was a classmate and fellow cast member in play productions at the school. Her love of acting clashed with her mother's strict religious beliefs, and it wasn't too long before Vance, nicknamed "Viv" by friends, became very rebellious, often sneaking out of her bedroom and staying out after curfew. She soon changed her surname to Vance and moved to Albuquerque, New Mexico, to find work as an actress. Vance was a founding member of the Albuquerque Little Theatre, where she played a vamp in This Thing Called Love and a nun in The Cradle Song, the local theatre community helped pay her way to New York to study under Eva Le Gallienne.

Starting in 1934, she was in a number of shows on Broadway playing second or third leads:

and later in her career: