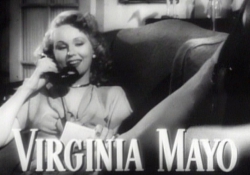 Virginia Mayo was an American film actress. After a short career in vaudeville, Mayo progressed to films and during the 1940s established herself as a supporting player in such films as The Best Years of Our Lives and White Heat. She worked extensively during the 1950s, but after this her appearances were fewer. She worked occasionally until her final performance in 1997.

Born Virginia Clara Jones in St. Louis, Missouri. Tutored by a series of dancing instructors engaged by her aunt, she appeared in the St. Louis Municipal Opera chorus and then appeared with six other girls at an act at the Jefferson Hotel. There she was recruited by vaudeville performer Andy Mayo to appear in his act, taking his surname as her stage name. She appeared in vaudeville for three years in the act, appearing with Eddie Cantor on Broadway in 1941’s Banjo Eyes.

Mayo continued her career as a dancer, then signed a contract with Samuel Goldwyn and appeared in several of Goldwyn’s movies. With Danny Kaye she played the dream-girl heroine in comedies including Wonder Man, The Kid from Brooklyn and The Secret Life of Walter Mitty. In her Hollywood heyday, Mayo was known as the quintessential voluptuous beauty. It was said that she “looked like a pinup painting come to life,” and she played just such a role in the 1949 film comedy, The Girl from Jones Beach. According to widely published reports from the late 1940s, the Sultan of Morocco declared her beauty to be proof of the existence of God.