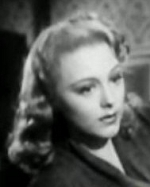 Born Margaret Cynthia Field in London, her father was the judge of England’s Leicester County Court Circuit. Her mother was a cousin of Robert E. Lee.

She appeared in over 40 films including Ladies in Love, Waterloo Bridge, Repeat Performance, A Connecticut Yankee in King Arthur’s Court and Dial 1119. She started her film career in England then was brought to the U.S. to appear in David O. Selznick’s Little Lord Fauntleroy. In the late 1930s she appeared in various parts in 20th Century Fox’s Mr. Moto movie series.