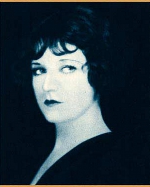 Viola Dana was an American film actress who was successful during the era of silent movies.

Born Virginia Flugrath, Dana was a child star, appearing on the stage at the age of three. She read Shakespeare and particularly identified with the teenage Juliet. She enjoyed a long run at the Hudson Theater in New York City. A particular favorite of audiences was her performance in David Belasco’s Poor Little Rich Girl, when she was 16. She went into vaudeville with Dustin Farnum in The Little Rebel and played a bit part in The Model by Augustus Thomas.

Dana entered films in 1910. Her first motion picture was made at a former Manhattan riding academy on West 61st Street. The stalls had been transformed to dressing rooms. Dana became a star with the Edison Company, working at their studio in the Bronx. She fell in love with Edison director John Hancock Collins and they married in 1915. Dana’s success in Collins’s Edison features such as Children of Eve and The Cossack Whip encouraged producer B. A. Rolfe to offer the couple lucrative contracts with his company, Rolfe Photoplays, which released through Metro Pictures Corporation. Dana and Collins accepted Rolfe’s offer in 1916 and made several important films for Rolfe/Metro, notably The Girl Without A Soul and Blue Jeans. Rolfe closed his New York-area studio down in the face of the 1918 influenza epidemic and sent most of his personnel to California. Dana left before Collins, who was finishing work at the studio; however, Collins contracted influenza which rapidly turned into pneumonia and died in a New York hotel room on October 23, 1918.

Dana remained in California acting for Metro. In 1920, she became engaged to Ormer Locklear, a daring aviator and military veteran. Locklear died when his plane crashed on August 2, 1920 during a nighttime film shooting. Locklear was the prototype for the Robert Redford movie, The Great Waldo Pepper, and Dana was an honored guest for the premiere of The Great Waldo Pepper.