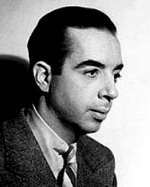 Vincente Minnelli, born Lester Anthony Minnelli, was a Hollywood director and stage director. He was married to Judy Garland from 1945 until 1951; they were the parents of Liza Minnelli.

Born as Lester Anthony Minnelli in Chicago, he was the youngest of four known sons, only two of whom survived to adulthood, born to Marie Émilie Odile Lebeau and Vincent Charles Minnelli. His father was musical conductor of Minnelli Brothers’ Tent Theater. Minnelli’s Chicago-born mother was of French Canadian descent and his paternal grandfather was from Sicily. The family toured small towns primarily in Ohio, Indiana and Illinois before settling permanently in Delaware, Ohio.

Following his high school graduation, Minnelli moved to Chicago where he lived briefly with his grandmother and an aunt. His first job was at Marshall Field’s department store as a window display designer. He later worked as a photographer for Paul Stone, who specialized in photographing actors from Chicago’s theater district. His interest in the theater grew and he was greatly interested in art and immersed himself in books on the subject.

Minnelli’s first job in the theater was at the Chicago Theatre where he worked as a costume and set designer. Owned by Balaban and Katz, the theater chain soon merged with a bigger national chain of Paramount-Publix and Minnelli sometimes found himself assigned to work on shows in New York City. He soon left Chicago and rented a tiny Greenwich Village apartment. He was eventually employed at Radio City Music Hall as a set designer and worked his way up to stage director.