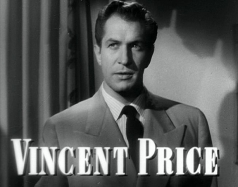 Vincent Leonard Price II was an American actor, well known for his distinctive voice and serio-comic attitude in a series of horror films made in the latter part of his career.

Price was born in St. Louis, Missouri, the son of Marguerite Cobb and Vincent Leonard Price, Sr., who was the president of the National Candy Company. His grandfather, Vincent Clarence Price, invented “Dr. Price’s Baking Powder”, the first cream of tartar baking powder, and secured the family’s fortune.

Price attended St. Louis Country Day School. He was further educated at Yale in art history and fine art. He was a member of the Courtauld Institute, London. He became interested in the theatre during the 1930s, appearing professionally on stage from 1935.

He made his film debut in 1938 with Service de Luxe and established himself in the film Laura, opposite Gene Tierney, directed by Otto Preminger. He also played Joseph Smith, Jr. in the movie Brigham Young, as well as a pretentious priest in The Keys of the Kingdom .