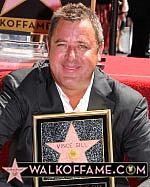 The Hollywood Chamber of Commerce proudly honored Vince Gill today, September 6, 2012, with a star on the Hollywood Walk of Fame. “We are proud to honor one of Country music’s most popular singers and we are so happy to say that we will be placing his star next to the star of his lovely wife Amy Grant,” stated Walk of Fame producer Ana Martinez. Grant was on hand to speak at the ceremony along with music producer Tony Brown and singer Reba McEntire.

Vincent Grant Gill was born April 12, 1957 in Norman, Okla. His mother and father encouraged him to learn to play guitar and banjo, which he did along with bass, mandolin, dobro and fiddle. While in high school, he performed in the bluegrass band Mountain Smoke, which built a strong local following and opened a concert for Pure Prairie League.

After graduating high school in 1975, Gill moved to Louisville, Ky. to be part of the band Bluegrass Alliance. After a brief time in Ricky Skaggs’s Boone Creek band, Gill moved to Los Angeles and joined Sundance, a bluegrass group fronted by fiddler Byron Berline. In 1979, he joined Pure Prairie League as lead singer and recorded three albums with the band, the first of which yielded the Top Ten pop hit “Let Me Love You Tonight” in 1980. Departing the group in 1981, Gill joined Rodney Crowell’s backing band the Cherry Bombs, where he met and worked with Tony Brown and Emory Gordy Jr., both of whom would later produce many of his future solo albums.

In 1983, Gill signed with RCA Records and moved to Nashville to pursue his dream of being a Country Music artist. His debut mini-album Turn Me Loose (produced by Gordy) was released the following year, featuring his first charting solo single, “Victim of Life’s Circumstance.”

Gill signed with MCA Records in 1989, reuniting with Brown as a producer, and released the album When I Call Your Name. While the debut single “Oklahoma Swing” (a duet with Reba McEntire) reached the Top 20, it was the title cut that firmly established the singer as a new force on the Country Music scene. The song peaked at No. 2 and earned Gill his first CMA Award (Single of the Year) and his first Grammy Award (Best Male Country Vocal Performance) in 1990. The next single, “Never Knew Lonely,” peaked at No. 3 and the album was certified Platinum by the RIAA for sales of more than one million copies.

Vince Gill co-hosted the CMA Awards for the first time in 1992. He continued to host “Country Music’s Biggest Night™” for 12 consecutive years, ending his run in 2003. Gill not only set a record for the most times anyone has consecutively hosted a televised award show, but he set the bar for other television awards emcees with his respect for his peers and the audience, quick ad libs and gentle humor.

Gill recorded his first Christmas album Let There Be Peace on Earth in 1993, before releasing When Love Finds You in 1994. This album also sold more than four million copies and featured six hits including the title cut, “What the Cowgirls Do,” “Whenever You Come Around,” “Which Bridge to Cross (Which Bridge to Burn),” “You Better Think Twice” and “Go Rest High On That Mountain.” Becoming an in-demand duet partner, Gill sang with Amy Grant on “House of Love,” the title cut of her 1994 album which became a hit on adult contemporary radio stations, and with Dolly Parton on a duet version of her signature “I Will Always Love You” earning the duo the CMA Vocal Event of the Year Award 1996.  His status as an in-demand duet partner continued with his 1999 duet “If You Ever Leave Me” with Barbra Streisand on the latter’s album A Love Like Ours.

Gill married singer Amy Grant in 2000, and released Let’s Make Sure We Kiss Goodbye that same year. The album celebrated his new relationship and featured the hit “Feels Like Love.”  Three years later, Gill released Next Big Thing, his first solo-produced album, featuring the title cut and “Young Man’s Town.” He reunited with Rodney Crowell, Tony Brown, Richard Bennett and Hank Devito (as well as new additions Eddie Bayers, John Hobbs and Michael Rhodes) as the Notorious Cherry Bombs, and the supergroup released an album in 2004 on Universal South Records featuring the single “It’s Hard to Kiss the Lips at Night that Chew Your Ass Out All Day Long.”

In 2010, Gill became a member of the Western swing/country group The Time Jumpers.  Formed in 1998 by a group of Nashville’s recording studio elite, the band began just as a jam session for the musicians to blow off steam and play their favorite songs.   On any given Monday, stars such as Reba McEntire, Bonnie Raitt , Norah Jones, Toby Keith, Sheryl Crow, Elvis Costello and even Robert Plant have been known to pull up a chair and sit in with the band.   In 2007, the group recorded a live album titled Jumpin' Time that was nominated for two Grammy® awards.  The Time Jumpers first studio album will be released by Rounder Records on September 11.

Gill has sold more than 26 million albums. He has earned 18 CMA Awards, including Entertainer of the Year in 1993 and 1994. He is tied with George Strait for having won the most CMA Male Vocalist Awards (five), and is currently third only to George Strait and Brooks and Dunn for accumulating the most CMA Awards in history. Gill is a member of the Grand Ole Opry, and has received 20 Grammy Awards to date, the most of any male Country artist. An avid golfer, he helped create the annual Vince Gill Pro-Celebrity Invitational Golf Tournament (“The Vinny”) in 1993 in order to help support junior golf programs throughout Tennessee. Besides being known for his talent as a performer, musician and songwriter, Gill is regarded as one of Country Music’s best known humanitarians, participating in hundreds of charitable events throughout his career.  In 2006, The Academy of Country Music named Gill their Humanitarian of The Year.

In August of 2007, the Country Music Association inducted Gill as the newest member of the coveted Country Music Hall of Fame.  Gill is the third artist inducted in the "Career Achieved National Prominence Between 1975 and the Present" category, which was created in 2005. 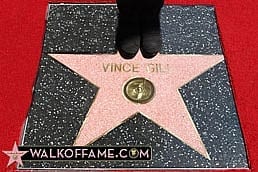