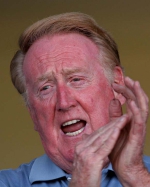 Vincent Edward Scully is an American sportscaster, known primarily as the play-by-play voice of the Brooklyn and Los Angeles Dodgers baseball team on Prime Ticket, KCAL-TV and KABC radio. His 61 seasons with the Dodgers is the longest of any broadcaster with a single club in professional sports history, and he is second by a year to only Tommy Lasorda in terms of length of years with the Dodgers organization in any capacity.

Born in The Bronx, Scully grew up in the Washington Heights section of Manhattan. He made ends meet by delivering beer and mail, pushing garment racks, and cleaning silver in the basement of the Pennsylvania Hotel in New York City. His father was a silk salesman; his mother a Roman Catholic homemaker of Irish descent with red hair like her son. Scully attended high school at Fordham Preparatory School in the Bronx. As a kid growing up in Washington Heights, he was a big Mel Ott fan. He knew he wanted to be a sports announcer the moment he became fascinated with football broadcasts on his radio.

Scully began his career as a student broadcaster and journalist at Fordham University. While at Fordham, he helped form its FM radio station WFUV, was assistant sports editor for Volume 28 of The Fordham Ram his senior year, sang in a barbershop quartet, played center field for the Fordham Rams baseball team, got a degree, and sent about 150 letters to stations along the Eastern seaboard. He got only one response, from CBS Radio affiliate WTOP in Washington, which made him a fill-in.