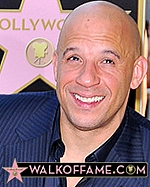 You can watch Vin Diesel star ceremony at the end of this page.

The Hollywood Chamber of Commerce proudly honored actor/filmmaker Vin Diesel with a star on the Hollywood Walk of Fame today, August 26, 2013, at 11:30 a.m. Diesel’s star was dedicated in front of the historic Hollywood Roosevelt Hotel. “Vin Diesel is one of Hollywood’s most popular action stars known the world over,” stated Ana Martinez, producer of the Walk of Fame ceremonies. “We are thrilled to add him to our action-packed Walk of Fame, where he should feel right at home!”

A native of New York City, Vin Diesel has become one of Hollywood’s most sought-after film stars. In addition to his huge box-office success, Diesel is a prominent producer and filmmaker. Diesel can next be seen starring in Riddick, the latest chapter of the groundbreaking saga that began with 2000’s hit sci-fi film Pitch Black and 2004’s The Chronicles of Riddick, which he also produced. The epic action-adventure film will be released by Universal Pictures worldwide on Friday, September 6, 2013. www.riddickmovie.com

Diesel was seen in the box-office smash hits Fast & Furious 6, which has grossed more than $775 million worldwide, 2011’s Fast Five, the fifth installment of the blockbuster series, as well as Fast & Furious.  He wore multiple hats on all three projects as he reprised his role as Dominic Toretto and produced the films, along with Neal H. Moritz. He also wrote and directed the original short film Los Bandoleros. The short was showcased on the Fast & Furious DVD and tells the intriguing back-story of thecharacters and events leading up to the explosive oil truckheist in the film.

Diesel previously starred alongside Michelle Yeoh in 20th Century Fox’s Babylon A.D., for director Mathieu Kassovitz. Diesel was also seen in the courtroom drama Find Me Guilty. Set in the ’80s, the film documents the famous three-year trial of 20 members of a mob family.  Diesel earned critical acclaim for his portrayal of Jackie DiNorscio, the one mobster who chose to forgo his rights to an attorney and defended himself.

Topping Diesel’s list of credits is his star turn in The Fast and the Furious, for which he won an MTV Movie Award forBest On-Screen Team, along with co-star PaulWalker, and was nominated for Best Male Performance. He starred in his first comedy feature for Disney, The Pacifier, a huge box-office success. He also starred in the blockbuster xXx,which he executive produced. Diesel appeared in Saving Private Ryan, for which he was nominated for a Screen Actors Guild Award as part of the film’s ensemble cast. His other credits include roles in Boiler Room; Knockaround Guy;the action-thriller A Man Apart, which he also produced; and the voice ofthe title character in The Iron Giant, which won an Annie Award for Best Animated Feature.

Upcoming projects for Diesel include producing and starring in Universal Pictures’ upcoming seventh installment of the Fast & Furious series, as well as Kojak.  He will re-team with Shankman on The Machine, and star in and produce World’s Most Wanted with Moritz.

Diesel wrote, produced, directed and starred in the independent short Multi-Facial, which explored the issue of being multiracial in today’s society. Thefilm follows Diesel, whose mother is Caucasian and biological father is African-American, on several auditions in which he is told he is either “too black” or “too white” for the part. It was after seeing this short at the 1995 Cannes Film Festival that director Steven Spielberg created the role of Private Adrian Carparzo in Saving Private Ryan specifically for Diesel.  Diesel wrote, produced, directed and starred in the full-length feature Strays, a film which he described as a “multicultural Saturday Night Fever.” The drama was selected to compete at the 1997 Sundance Film Festival.

Another endeavor in Diesel’s entrepreneurial rise was the creation of his successful video game company, Tigon Studios, which created and produced 2004’s top-selling Xbox game, The Chronicles of Riddick: Escape From Butcher Bay.

For more information and to view who shares a star on the Hollywood Walk of Fame, visit www.walkoffame.com. 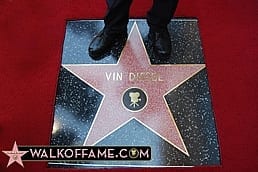