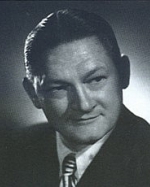 Victor Young was an American composer, arranger, violinist and conductor. He was born in Chicago.

Young began as a classical composer and concert violinist but moved into the popular music sphere when he joined Isham Jones’ orchestra. He studied the piano with Isidor Philipp of the Paris Conservatory. In the mid-1930s he moved to Hollywood where he concentrated on films, recordings of light music and providing backing for popular singers, including Bing Crosby.

His composer credits include “When I Fall in Love,” “Blue Star ,” “Moonlight Serenade ” from the motion picture The Star, “Sweet Sue,” “Can’t We Talk It Over,” “Street of Dreams,” “Love Letters,” “Around the World,” “My Foolish Heart,” “Golden Earrings,” “Stella by Starlight”, and “I Don’t Stand a Ghost of a Chance with You.”

Young was signed to Brunswick in 1931 where his studio groups recorded scores of popular dance music, waltzes and semi-classics through 1934. His studio groups often contained some of the best jazz musicians in New York, including Bunny Berigan, Tommy Dorsey, Jimmy Dorsey, Joe Venuti, Arthur Schutt, Eddie Lang, and others. He used first-rate vocalists, including Paul Small, Dick Robertson, Harlan Lattimore, Smith Ballew, Helen Rowland, Frank Munn, The Boswell Sisters, Lee Wiley and others. One of his most interesting recordings was the January 22, 1932 session containing songs written by Herman Hupfeld “Goopy Geer” and “Down The Old Back Road”, which Hupfeld sang and played piano on .