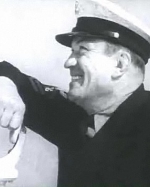 McLaglen was born in Tunbridge Wells, Kent. His father, an Anglican bishop, moved the family to South Africa when McLaglen was a child. He had eight brothers and a sister. Four of his brothers also became actors: Arthur, an actor and sculptor, and Clifford, Cyril and Kenneth. Other siblings included Frederick, Sydney, Lewis, and a sister, Lily. Another brother, Leopold McLaglen, who appeared in one film, gained notoriety prior to World War I as a showman and self-proclaimed World Jujutsu Champion, who authored a book on the subject.

He left home at fourteen to join the British Army with the intention of fighting in the Second Boer War. However, much to his chagrin, he was stationed at Windsor Castle with the Life Guards and was later forced to leave the army when his true age was discovered.

Four years later, he moved to Canada, where he earned a living as a wrestler and heavyweight boxer, with several notable wins in the ring. One of his most famous fights was against Heavyweight Champion Jack Johnson, in a 6 round exhibition bout. Between bouts, McLaglen toured with a circus, which offered $25 to anyone who could go three rounds with him. He returned to England in 1913 and during World War I served as a Captain with the 10th Battalion, Middlesex Regiment, part of The Princess of Wales’s Royal Regiment. Later he claimed to have served with the Royal Irish Fusiliers. He served for a time as military Provost Marshal for the city of Baghdad. He also continued boxing, and was named Heavyweight Champion of the British Army in 1918. After the war, he began taking roles in British silent films.