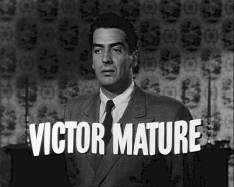 Mature was born in Louisville, Kentucky to an Italian-speaking father from the town Pinzolo, in the Italian part of former Tyrol, Marcello Gelindo Maturi, later Marcellus George Mature – a cutler, and a Kentucky-born mother of Swiss-American heritage, Clara P. Ackley. An older brother, Marcellus Paul Mature, died at 11 in 1918 from osteomyelitis. Victor Mature was educated at parochial schools, the Kentucky Military Institute and the Spencerian Business School. He briefly sold candy and operated a restaurant before moving to California.

Discovered while on stage at the Pasadena Community Playhouse, his first leading role was as a fur-clad caveman in One Million B.C., after which he joined 20th Century Fox to star opposite actresses such as Betty Grable and Rita Hayworth.

In July 1942 Mature attempted to enlist in the U.S. Navy but was rejected for color blindness. He enlisted in the U.S. Coast Guard after taking a different eye test the same day. He was assigned to the, which was doing Greenland patrol work. After 14 months aboard the Storis, Mature was promoted to the rate of Chief Boatswain’s Mate. In 1944 he did a series of War Bond tours and acted in morale shows. He assisted Coast Guard recruiting efforts by being a featured player in the musical revue “Tars and Spars” which opened in Miami, Florida in April 1944 and toured the United States for the next year. In May 1945 Mature was reassigned to the Coast Guard manned troop transport which was involved in transferring troops to the Pacific Theater. Mature was honorably discharged from the Coast Guard in November 1945 and he resumed his acting career.