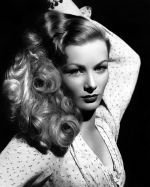 Veronica Lake was an American film actress and pin-up model. She enjoyed both popular and critical acclaim, most notably for her femme fatale roles in film noir with Alan Ladd during the 1940s, as well as her peek-a-boo hairstyle. Her success did not last. Following a string of broken marriages and long struggles with mental illness and alcoholism, she died of hepatitis.

Lake was born as Constance Frances Marie Ockelman in Brooklyn, New York. Her father, Harry E. Ockelman, of Danish-Irish descent, worked for an oil company onboard a ship. Her father died in an industrial explosion in Philadelphia in 1932 when she was ten. Her mother, née Constance Charlotta Trimble, , married family friend Anthony Keane, a newspaper staff artist, a year later, and Lake began using his last name.

Lake was sent to Villa Maria, an all-girls Catholic boarding school in Montreal, Canada, and from which she was expelled. The Keane family later moved to Miami, Florida. Lake attended high school in Miami, where she was known for her beauty. She had a troubled childhood and was, according to her mother, diagnosed as schizophrenic.

In 1938, Lake moved with her mother and stepfather to Beverly Hills, where her mother enrolled her in the Bliss-Hayden School of Acting. Her first appearance on screen was for RKO, playing a small role among several coeds in the 1939 film, Sorority House. Similar roles followed, including All Women Have Secrets and Dancing Co-Ed. During the making of Sorority House, director John Farrow first noticed how her hair always covered her right eye, creating an air of mystery about her and enhancing her natural beauty. She was then introduced to the Paramount producer Arthur Hornblow, Jr. He changed her name to Veronica Lake because the surname suited her blue eyes. She was still a teenager.