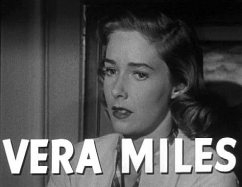 Vera Miles is an American film actress who gained popularity for starring in films such as Psycho, The Searchers, The Wrong Man, The Man Who Shot Liberty Valance and Psycho II.

Miles was born as Vera June Ralston in Boise City, Oklahoma, the daughter of Burnice and Thomas Ralston. She grew up in Pratt, Kansas, and later, in Wichita, Kansas, where she worked nights as a Western Union operator-typist and graduated from Wichita North High School in 1947. She was crowned Miss Kansas in 1948, placing third in the Miss America contest.

She moved to Los Angeles where, in 1950, she landed small roles in film and television. These included a minor part as a chorus girl in Two Tickets to Broadway, a musical starring Janet Leigh, with whom Miles would go on to co-star nine years later in the classic Alfred Hitchcock film, Psycho. Attracting the attention of several producers, she was put under contract at various studios where she posed for cheesecake and publicity photographs, as was standard procedure for most up-and-coming Hollywood starlets of the era.

Under contract to Warner Bros., Miles was cast in films such as The Charge At Feather River in 3-D, but lost out on doing a big 3-D hit starring Vincent Price, House of Wax, for which she was considered. She once recalled: “I was dropped by the best studios in town.” In Tarzan’s Hidden Jungle, filmed in 1954 and released in 1955, she played Tarzan’s love interest. In 1954, she married her Tarzan co-star, Gordon Scott; they divorced in 1959.