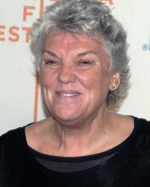 Tyne Daly is an American stage and screen actress, widely known for her work as Detective Lacey in the television series Cagney & Lacey. She has won six Emmy Awards for her television work, and the Tony Award for Best Performance by a Leading Actress in a Musical in ‘ in 1989.

Daly was born Ellen Tyne Daly‘ in Madison, Wisconsin, into a creative family; she is the daughter of actor James Daly. Her younger brother is actor Timothy Daly. Her sister-in-law, Amy Van Nostrand, is also an actress. She was raised in Westchester County, New York, where she started her career by performing in summer stock with her family; she earned her Equity Card at age 15. She studied at Brandeis University and The American Musical and Dramatic Academy.

Daly was married to actor/director Georg Stanford Brown from 1966 to 1990.

She appeared as social worker Maxine Gray, who was also the mother to the show’s title character on the CBS drama Judging Amy”, which ran from 1999 to 2005. Addressing a conference of the National Association of Social Workers in 2000, Daly said that she had learned from social workers and social work texts to improve her portrayal of her character. She added: “I take from you because you are the ones dealing with all the bad institutions of our society: institutionalized poverty, institutionalized racism, institutionalized cynicism.”