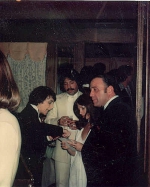 Tony Orlando is an American singer best known for his work with the group Dawn in the early 1970s.

Born Michael Anthony Orlando Cassavitis to a Greek father and a Puerto Rican mother, he was raised in Manhattan’s then-notorious Hell’s Kitchen.

Tony Orlando’s musical career started with The Five Gents, a doo-wop group he formed. His first success came when he recorded the hits Bless You and Halfway To Paradise in 1961. After becoming general manager at Columbia Records, he was tempted back to a recording career when he was asked to record a demo record of Candida. The label liked the demo so much that Tony’s performance was released, under the band name Dawn. After Orlando discovered that there were six touring groups using that name, Dawn became Dawn featuring Tony Orlando. Joining Tony were Telma Hopkins and Joyce Vincent Wilson, and the trio scored a string of #1 hits with Tie a Yellow Ribbon Round the Ole Oak Tree, Knock Three Times, and He Don’t Love You . With a successful recording career, Orlando then set his sights on television which resulted in his highly rated weekly variety series Tony Orlando and Dawn on CBS. The show, which ran for four seasons from 1974 to 1976, welcomed the biggest names in show business each week as Tony’s guests, including his boyhood idols, Jackie Gleason and Jerry Lewis.