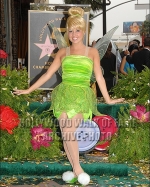 Tinker Bell honored with 2,418th Star on the Walk of Fame in the Category of Motion Pictures

Pixie dust was in generous supply on Hollywood's world famous "Walk of Fame" as Tinker Bell, the beloved fairy character who sprang from the pages of J.M. Barrie's literary classic, Peter Pan, to become an animated superstar and the Disney symbol for fun, enchantment and magic through films, television and theme park appearances, was honored with a star of her own. Tinker Bell's twinkling star ceremony coincides with the debut of Disney Fairies' latest feature film (from Walt Disney Studios Home Entertainment), "Tinker Bell and the Great Fairy Rescue," released nationwide on September 21, 2010.

Tinker Bell made her Disney debut in the Studio's 1953 animated classic, and immediately winged her way into the hearts and imagination of moviegoers the world over. She went on to become an important part of the landmark Disney TV anthology, "The Wonderful World of Color," and got each show off to a flying start along with host Walt Disney. Tink's latest roles in a series of acclaimed movies for Blu-ray&trade;, DVD, and movie download, have added to her worldwide acclaim and taken viewers into the enchanting world of fairies.

Tinker Bell's legacy is the inspiration for one of Disney's most popular franchises – Disney Fairies – which includes an array of consumer products and multi-media content anchored by the two previous films "Tinker Bell" and "Tinker Bell and the Lost Treasure." In these imaginative feature length films created and produced by DisneyToon Studios, Tinker Bell and her colorful band of fairy friends celebrate the coming new seasons, and the adventures associated with each one. Voices for the Tinker Bell films are provided by such talented actors as Mae Whitman, Lucy Liu, Kristin Chenoweth, Raven-Symoné, Pamela Adlon, and Michael Sheen.

About Tinker Bell and the Great Fairy Rescue:
What would you do if you met a fairy? Witness the historic moment when Tinker Bell first meets a human being, and it's not who you think.

Years before meeting Wendy and the Lost Boys, Tinker Bell met Lizzy, a little girl with a steadfast belief in the power of pixie dust and the magic land of fairies. During the fairies' summer visit to the flowering meadows of England, two very different worlds unite for the first time and Tink develops a special bond with a curious child in need of a friend. As her fellow fairies launch a daring rescue, Tinker Bell takes a huge risk, putting her own safety and the future of all fairykind in jeopardy.

Experience Disney's astonishing all-new movie about the true power of faith and friendship. Bursting with excitement and imagination, Tinker Bell and the Great Fairy Rescue is magical entertainment for the whole family. You might even learn to fly.
To learn more, visit http://disney.go.com/fairies/. 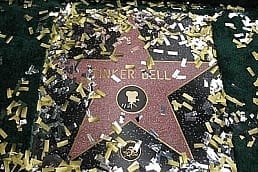