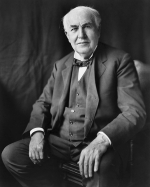 About
Thomas A. Edison

Thomas Alva Edison was an American inventor, scientist, and businessman who developed many devices that greatly influenced life around the world, including the phonograph, the motion picture camera, and a long-lasting, practical electric light bulb. Dubbed “The Wizard of Menlo Park” by a newspaper reporter, he was one of the first inventors to apply the principles of mass production and large teamwork to the process of invention, and therefore is often credited with the creation of the first industrial research laboratory. Edison’s Menlo Park laboratory complex is said to live on in California’s “invention factory” at Silicon Valley.

Edison is considered one of the most prolific inventors in history, holding 1,093 U.S. patents in his name, as well as many patents in the United Kingdom, France, and Germany. He is credited with numerous inventions that contributed to mass communication and, in particular, telecommunications. These included a stock ticker, a mechanical vote recorder, a battery for an electric car, electrical power, recorded music and motion pictures.His advanced work in these fields was an outgrowth of his early career as a telegraph operator. Edison originated the concept and implementation of electric-power generation and distribution to homes, businesses, and factories ? a crucial development in the modern industrialized world. His first power station was on Manhattan Island, New York.

Thomas Edison was born in Milan, Ohio, and grew up in Port Huron, Michigan. He was the seventh and last child of Samuel Ogden Edison, Jr. and Nancy Matthews Elliott. His father had to escape from Canada because he took part in the unsuccessful Mackenzie Rebellion of 1837. Edison considered himself to be of Dutch ancestry.

In school, the young Edison’s mind often wandered, and his teacher, the Reverend Engle, was overheard calling him “”. This ended Edison’s three months of official schooling. Edison recalled later, “My mother was the making of me. She was so true, so sure of me; and I felt I had something to live for, someone I must not disappoint.” His mother homeschooled him. Much of his education came from reading R.G. Parker’s School of Natural Philosophy and The Cooper Union.