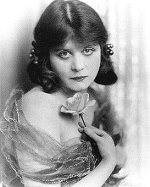 Theda Bara, born Theodosia Burr Goodman, was an American silent film actress. Bara was one of the most popular screen actresses of her era, and was one of cinema’s earliest sex symbols. Her femme fatale roles earned her the nickname “The Vamp”. The term “vamp” soon became a popular slang term for a sexually predatory woman. Bara, along with Broadway turned film actress Valeska Suratt, and the French film actress Musidora, popularized the vamp persona in the early years of silent film and was soon imitated by rival actresses such as Louise Glaum, Nita Naldi and Pola Negri.

Theodosia Burr Goodman was born in 1885 in the Avondale section of Cincinnati, Ohio. Her father was Bernard Goodman, a prosperous Jewish tailor born in Poland. Her mother, Pauline Louise de Coppett, was born in Switzerland and was also Jewish. Bernard and Pauline married in 1882.

Theda’s brother and sister were Marque and Esther, who also became a film actress under the name Lori Bara and married Francis W. Getty of London in 1920.

The origin of Bara’s stage name is somewhat murky; The Guinness Book of Movie Facts and Feats says it came from director Frank Powell, who learned Theda had a relative named Barranger. At the time, many thought the name was taken from an anagram of “Arab Death”.