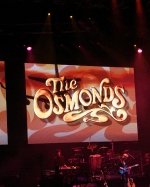 The Osmonds are an American family music group with a long and varied career?a career that took them from singing barbershop music as children, to achieving success as teen-music idols, to producing a hit television show, and to continued success as solo and group performers. The Osmonds are devout members of The Church of Jesus Christ of Latter-day Saints, and their religious values have influenced their careers.

When it began as a barbershop quartet, the group consisted of brothers Alan Osmond, Wayne Osmond, Merrill Osmond, and Jay Osmond. They were later joined by younger siblings Donny Osmond and Jimmy Osmond. Their only sister Marie Osmond, who never sang with her brothers at that time, would launch a successful solo career in the 70's. Older brothers George Virl Osmond, Jr. and Tom Osmond were born deaf and did not originally perform, although they later made occasional appearances, most notably on the family Christmas specials from the 70s. All of the Osmonds were born in their hometown of Ogden, Utah except the youngest, Jimmy, who was born in Canoga Park, California.

The Osmond Brothers' career began in 1958 when Alan, Wayne, Merrill, and Jay began singing barbershop music for local audiences in and around their hometown of Ogden, Utah. In the made-for-TV movie "," the Osmonds explain that they originally performed to earn money to support Virl and Tom in buying hearing aids and serving missions for their church. Despite their young ages, within a few years, the boys' talent and stage presence were strong enough that their father, George Osmond, took them to audition for Lawrence Welk in California. Welk turned them down, but on the same trip, they visited Disneyland and were hired to perform there after joining an adult barbershop quartet for some impromptu singing.

While the Osmond Brothers were performing at Disneyland, Andy Williams' father saw them and was so impressed he told his son to book them for his television show. Andy did, and the Osmond Brothers were regulars on The Andy Williams' show from 1962?1969, where they earned the nickname "one-take Osmonds" because of their professionalism and tireless rehearsing. Donny soon joined them on the show, making the Osmond Brothers a 5-member group. Marie and Jimmy were also introduced on the show as the years went by. During this time, the Osmonds also toured Europe, performing with Sweden's most popular singer, Lars Lönndahl, and even releasing a single where they sang a swedish version of "Two dirty little hands" .