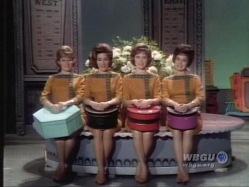 The Lennon Sisters are a singing group consisting of four siblings: Dianne, Peggy, Kathy, and Janet. They were all born in Los Angeles, California of German/Irish and Mexican ancestry. The original quartet were the eldest four in a family of twelve siblings. In 1992, younger sister Mimi replaced second sister Peggy who retired. Sister Dianne has also retired. The group were a regular on the weekly television show, The Lawrence Welk Show. The current group line-up, appearing mostly at Welk resorts, consists of Mimi, Janet and Kathy.

The quartet debuted on The Lawrence Welk Show on Christmas Eve 1955 after their school classmate, Larry Welk, son of Lawrence Welk, brought them to the attention of his father. Welk was home, sick in bed, when his son brought the sisters in to sing for him. He was so impressed he picked up the phone and booked them for that week’s show. They were a mainstay on the show until they left to start a career of their own in 1968. The quartet was only three members from 1960 to 1964; oldest sister Dianne married, left the group, and then rejoined them. Peggy sang the high harmony part, Kathy the low harmony, and Janet and Dianne sang the middle harmony and lead parts.

Their first hit, “Tonight, You Belong to Me” reached to #15 on the charts in 1956. This was followed by their 1961 single, “Sad Movies “, which turned out to be their highest-charting record. It provided them with the only number #1 single of their career, reaching the top of the charts in Japan.

Items such as coloring books, paper dolls and story books were produced with the Lennon sisters.