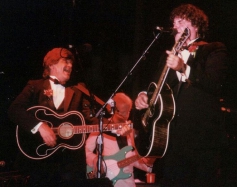 The Everly Brothers are country-influenced rock and roll performers, known for steel-string guitar playing and close harmony singing. The brothers are the most successful U.S. rock and roll duo on the Hot 100. Their greatest period came between 1957 and 1965.

Don and Phil Everly are both guitarists and use a simple vocal harmony mostly based on parallel thirds. With this, each line can often stand on its own as a melody line. This is in contrast to classic harmony lines which, while working well alongside the melody, sound strange by themselves.

For virtually all the Everly Brothers recordings, Don sings the lower harmony part, while Phil takes the higher part. One rare exception is on "Devoted To You". Although Don is still low and Phil is high, they switch singing the lead and harmony back and forth. As well, Don almost always sings any lines that are sung solo Among the very few exceptions to this rule is the Everlys' 1965 single "It's All Over", where Phil sings the song's solo lines.

In the late 1950s, the Everly Brothers were the rock 'n' roll youth movement's addition to close harmony vocal groups of which many were family bands. Among the Everly's famous counterparts in country music were The Delmore Brothers, The Louvin Brothers, Jim & Jesse and The Osborne Brothers.