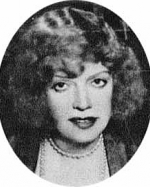 Guinan was born in Waco, Texas to Irish-Canadian immigrants Michael and Bessie Duffy Guinan. At 16, her family moved to Denver, Colorado where she was in amateur stage productions and played the organ in church. Guinan married John Moynahan, a cartoonist for the Rocky Mountain News, on December 2, 1904. No children were born from this union.

Moynahan’s career took them to Chicago, Illinois, where Guinan studied music before divorcing him and starting her career as a professional singer. She toured regional vaudeville with some success, but became known less for her singing than for her entertaining “wild west”-related patter.

In 1906 she moved to New York City, where she found work as a chorus girl before making a career for herself in national Vaudeville and in New York theater productions.