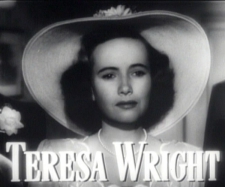 Teresa Wright was an American actress. She was born Muriel Teresa Wright in Harlem, New York City, the daughter of Martha and Arthur Wright, who was an insurance agent. She grew up in Maplewood, New Jersey. During her years at Columbia High School, she became seriously interested in acting and spent her summers working in Provincetown theater productions. Following her high school graduation in 1938, she returned to New York and was hired to understudy the role of Emily in Thornton Wilder’s Our Town. She took over the role when Martha Scott went to Hollywood to make the film version of the play.

In the fall of 1939, she appeared in the stage play Life with Father, playing the role of Mary Skinner for two years. It was there that she was discovered by a talent scout hired by Samuel Goldwyn to find a young actress for the role of Bette Davis’ daughter in the 1941 adaptation of Lillian Hellman’s The Little Foxes. She was immediately signed to a five-year Hollywood contract but asserted her seriousness as an actress. Her contract was unique by Hollywood standards because it contained the following clause:

Wright was nominated for the Academy Award for Best Supporting Actress for her screen debut in The Little Foxes. The following year, she was nominated again, this time for Best Actress for The Pride of the Yankees, in which she played opposite Gary Cooper as the wife of Lou Gehrig; that same year, she won Best Supporting Actress as the daughter-in-law of Greer Garson’s character in Mrs. Miniver. No other actor has ever duplicated her feat of receiving an Oscar nomination for each of her first three films.

In 1943, Wright was loaned out by Goldwyn for the Universal film Shadow of a Doubt, directed by Alfred Hitchcock. She played an innocent young woman who discovers that her beloved uncle, played by Joseph Cotten, is a serial murderer. Other notable films include The Best Years of Our Lives, an award-winning film about the adjustments of servicemen returning home after World War II, and The Men, another story of war veterans, which starred Marlon Brando.