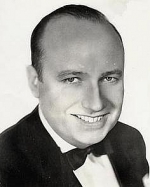 Wilfred Theodore Weems was a United States bandleader and musician.

Born in Pitcairn, Pennsylvania, Weems learned to play the violin and trombone. He attended the University of Pennsylvania, where he and his brother Art organized a small dance band. Going professional in 1923, Weems toured for the MCA Corporation, recording for Victor Records. Somebody Stole My Gal became the band’s first #1 hit in early 1924.

Weems was a Victor band from 1923 through 1933, although the final 3 sessions were released on Victor’s recently started-up Bluebird label. He then signed with Columbia for 2 sessions in 1934 and subsequently signed with Decca from 1936.

Weems moved to Chicago with his band around 1928. The Ted Weems Orchestra had more chart success in 1929 with the novelty song “Piccolo Pete”, and the #1 hit The Man from the South.