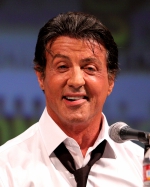 Sylvester Gardenzio Stallone, nicknamed Sly Stallone, is an American actor, filmmaker, screenwriter, and film director. Stallone is known for his machismo and Hollywood action roles. Two of the notable characters he has portrayed include boxer Rocky Balboa and soldier John Rambo. The Rocky and Rambo franchises, along with several other films, strengthened his reputation as an actor and his box office earnings.

Stallone’s film Rocky was inducted into the National Film Registry as well as having its film props placed in the Smithsonian Museum. Stallone’s use of the front entrance to the Philadelphia Museum of Art in the Rocky series led the area to be nicknamed the Rocky Steps. Philadelphia has a statue of his Rocky character placed permanently near the museum, on the right side before the steps.

Sylvester Stallone was born in New York City, the son of Frank Stallone, Sr., an Italian immigrant hairdresser, and Jackie Stallone, an astrologer, former dancer, and promoter of women’s wrestling. He is the brother of actor and musician Frank Stallone. Stallone’s father was born in Castellammare Del Golfo, Sicily, and emigrated to the United States as a child, while Stallone’s mother was of Russian Jewish and French descent.

Complications his mother suffered during labor forced her obstetricians to use two pairs of forceps during his birth; misuse of these accidentally severed a nerve and caused paralysis in parts of Stallone’s face. As a result, the lower left side of his face is paralyzed, including parts of his lip, tongue, and chin, an accident which has given Stallone his trademark snarling look and slightly slurred speech. He spent his first five years in Hell’s Kitchen, bouncing between foster homes while his parents endured a loud, troubled marriage. Eventually reunited with them, Stallone’s odd face made him an outcast in school, where he was often suspended for fighting, other behavior problems, and poor grades. His father, a beautician, moved the family to Washington DC, where he opened a beauty school. His mother opened a women’s gymnasium called Barbella’s in 1952.} They divorced when Stallone was 11, and he was later sent to a special high school for “troubled kids,” where he was voted “most likely to end up in the electric chair”.