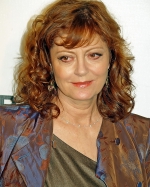 Susan Sarandon is an American actress. She has worked in films and television, since 1969, and won an Academy Award for Best Actress for her performance in the 1995 film Dead Man Walking. She was nominated for the award for four films, before that, and has received other recognition for her work. She is also noted for her social and political activism for a variety of liberal causes.

Sarandon, the eldest of nine children in a Roman Catholic family, was born as Susan Abigail Tomalin in New York City, as the daughter of Leonora Marie and Phillip Leslie Tomalin, who worked as an advertising executive, television producer and nightclub singer, during the big band era. Sarandon’s father was of English, Irish and Welsh ancestry and her Italian American mother’s ancestors emigrated from the regions of Tuscany and Sicily. She attended a Catholic schools. In 2006, Sarandon and 10 of her relatives, traveled to Wales to trace her family’s Welsh genealogy. Their journey was documented by the BBC Wales program, Coming Home: Susan Sarandon. In 2006 she also received the “Ragusani nel mondo” prize, since she had recently discovered her Sicilian roots, in Ragusa, Italy.

Sarandon grew up in Edison, New Jersey, where she graduated from Edison High School in 1964. She then attended The Catholic University of America, from 1964 to 1968, and earned a BA in drama and worked with noted drama coach and master teacher, Father Gilbert Hartke.

In 1969, Sarandon went to a casting call for the motion-picture Joe, with her then-husband Chris Sarandon. Although he did not get a part, she was cast in a major role of a disaffected teen, who disappears into the seedy underworld. Between the years 1970 and 1972, Sarandon played Patrice Kahlman on the short-lived soap opera A World Apart, and on Search for Tomorrow, in the role of Sarah Fairbanks. She also appeared in Lady Liberty, by Mario Monicelli, opposite Sophia Loren.