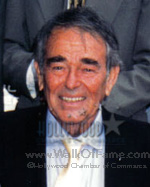 Stuart Maxwell Whitman is an American actor. Stuart Whitman is arguably best-known for playing Marshal Jim Crown in the western television series Cimarron Strip in 1967. Whitman also starred with John Wayne in the Western movie, The Comancheros, in 1961, and received top billing as the romantic lead in the extravagant aerial epic Those Magnificent Men in Their Flying Machines in 1965.

Whitman was born in San Francisco, California, the eldest of two sons. His parents, Cecilia and Joseph Whitman, traveled frequently during his childhood, and as a result, he attended over twenty schools. He graduated from high school and spent three years in the Army Corps of Engineers. He became a boxer and was at one time a top light heavyweight contender. After leaving the army, he enrolled in Los Angeles City College and the Los Angeles Academy of Dramatic Art.

Whitman was a supporting actor in When Worlds Collide, All American, Brigadoon, Silver Lode, Ten North Frederick, These Thousand Hills, and The Sound and the Fury. His first leading man role is in Murder, Inc. in 1960. He was signed on as a contract star with 20th Century Fox.

In 1961, Whitman was nominated for the Academy Award for Best Actor for his role as a child molester in The Mark, a role many other better known actors turned down. He has since appeared in starring and supporting roles in many films, including Francis of Assisi, The Fiercest Heart, The Longest Day, The Comancheros, Convicts 4, The Day and the Hour, Signpost to Murder, Shock Treatment, Rio Conchos, Those Magnificent Men in Their Flying Machines, Sands of the Kalahari, The City Beneath the Sea, An American Dream, The Last Escape, The Decks Ran Red starring Dorothy Dandridge on whose face Stuart planted Hollywood’s first interrracial kiss, The Invincible Six, Night of the Lepus, Shatter, Tony Saitta, Guyana: Crime of the Century, Treasure Seekers and The White Buffalo.