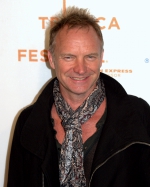 Sting, CBE is an English musician, singer-songwriter, activist, actor and philanthropist. Prior to starting his solo career, he was the principal songwriter, lead singer and bassist of the rock band The Police.

As a solo musician and member of The Police, Sting has received sixteen Grammy Awards for his work, receiving his first Grammy for Best Rock Instrumental Performance in 1981, and receiving an Oscar nomination for best song. He is a member of both the Rock and Roll Hall of Fame and the Songwriters Hall of Fame.

Sting was born Gordon Matthew Sumner in Wallsend, England, near Newcastle upon Tyne, the eldest of four children born to Audrey, a hairdresser, and Ernest Matthew Sumner, a milkman and engineer. His parents had three more children: Philip, Angela and Anita. Young Gordon would often assist his father with the early-morning milk-delivery rounds and his “best friend” was an old Spanish guitar with five rusty strings which had been left behind by an uncle who had emigrated to Canada.

He attended St. Cuthbert’s High School in Newcastle upon Tyne. He would often sneak into nightclubs like the Club-A-Go-Go, where he would watch acts such as Cream and Jimi Hendrix, artists who would later influence his own music. After jobs as a bus conductor, a construction labourer, and a tax officer, he attended Northern Counties College of Education, from 1971 to 1974 and qualified as a teacher. He then worked as a schoolteacher at St. Paul’s Middle School in Cramlington for two years.