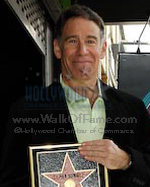 Composer Stephen Schwartz was honored with the 2,359th star on the Hollywood Walk of Fame. Leron Gubler, President and CEO of the Hollywood Chamber of Commerce, presided over the ceremony. Guests included Broadway stars Ben Vereen, John Rubenstein, and JoAnne Worley. The Wicked Company preformed “One Short Day” at the event.

Stephen Schwartz, composer-lyricist of the hit stage musical WICKED, has been nominated for six Academy Awards and winner of three. Schwartz wrote the lyrics for the Disney animated features, POCAHONTAS and THE HUNCHBACK OF NOTRE DAME and the recent Disney hit, ENCHANTED, and the songs for DreamWorks’ first animated feature, THE PRINCE OF EGYPT.

His well-known film songs include the Academy-Award-winning “Colors of the Wind” and “When You Believe”, and date back to the 70’s with “Day by Day”, “Beautiful City”, and “Butterflies Are Free”.

Appropriate to the address of his star, WICKED, is in its second year at the Pantages Theatre, where it has broken box office records. The New York Times said that WICKED is one of the most successful shows in Broadway history.” WICKED, which opened on October 30, 2003 in New York, is truly a worldwide phenomenon with four companies in North America – Broadway, Chicago, on national tour, and Los Angeles, as well as productions in London, Tokyo, and Stuttgart, and a fourth international production opening next summer in Melbourne.

A measure of Schwartz’ success in the theatre is that this year, when WICKED plays its 1900th performance in New York, he will become the only writer of any kind ever to have three shows run more than 1900 performances on Broadway.

Stephen Schwartz was born in New York City on March 6, 1948. He studied piano and composition at the Juilliard School of Music while in high school and graduated from Carnegie Mellon University in 1968 with a B.F.A. in Drama. His first major credit was the title song for the play BUTTERFLIES ARE FREE; the song was eventually used in the movie version as well.

In 1971, he wrote the music and new lyrics for the world-wide phenomenon GODSPELL. Schwartz won two Grammys and two Drama Desks for GODSPELL, which, at its height, was playing simultaneously in eight cities in America, including a long running Los Angeles production – plus London, Paris, Australia, and Germany. In South Africa, during the height of apartheid, Schwartz and his collaborator, John-Michael Tebelak, refused permission for the show to be produced unless it was performed by an integrated cast, before an integrated audience, and GODSPELL became the first show in South Africa to do so.

GODSPELL was followed by the English texts for Leonard Bernstein’s MASS, which opened the Kennedy Center for the Performing Arts in Washington, D.C. and was recently performed to great acclaim at the Hollywood Bowl.

He then wrote the music and lyrics for the enormously successful PIPPIN and two years later, THE MAGIC SHOW. At one point, GODSPELL, PIPPIN, and THE MAGIC SHOW were all running on Broadway simultaneously, making Mr. Schwartz one of the very few songwriters ever to have three shows on Broadway at the same time.

He next wrote the music and lyrics for THE BAKER’S WIFE, and the musical version of Studs Terkel’s WORKING, to which he contributed four songs, and which he also adapted and directed, winning the Drama Desk Award as best director; he later co-directed the PBS American Playhouse television production.

He then began collaborating with composer Alan Menken on the scores for the Disney animated features POCAHONTAS, for which he received two Academy Awards and another Grammy, and THE HUNCHBACK OF NOTRE DAME, and DreamWorks’ THE PRINCE OF EGYPT, winning his third Academy Award.

For television, Schwartz provided music and lyrics for the original television musical, GEPPETTO, seen on The Wonderful World of Disney.

Schwartz is also one of the most tireless supporters of new composers and lyricists. Under the auspices of the ASCAP Foundation and with the support of Disney, he has been artistic director for a musical theatre workshop in Los Angeles for over ten years, and also runs a yearly workshop in New York. He is a member of the Board of Governors of ASCAP board, and is also a member of the Council of the Dramatists’ Guild.