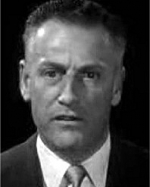 Stanley Earl Kramer was an American film director and producer responsible for some of Hollywood’s most famous “message” movies. His notable films include The Defiant Ones, On the Beach, Inherit the Wind, Judgment at Nuremberg, Ship of Fools and Guess Who’s Coming to Dinner. His work was recognized with the Irving G. Thalberg Memorial Award in 1961, and over the course of his career he received nine Academy Award nominations.

Director Steven Spielberg once described him as “one of our great filmmakers, not just for the art and passion he put on screen, but for the impact he has made on the conscience of the world.” Film critic David Thomson described Kramer as a “hero of the 1950s” and an “enterprising producer,” but also wrote of his later films that “commercialism, of the most crass and confusing kind, has devitalised all his projects”.

Kramer lived with his grandmother in the neighborhood of Manhattan known as Hell’s Kitchen. From an early age, Kramer had connections with the film industry; his uncle, Earl Kramer, worked in distribution at Universal Pictures and then as an agent in Hollywood. Kramer’s mother also worked in a secretarial position at Paramount Pictures. Kramer attended DeWitt Clinton High School in The Bronx and New York University where he was a member of the Pi Lambda Phi fraternity ; in his final year at the university, he was offered a paid internship in the writing department of 20th Century Fox. Kramer took the job although he had originally planned on attending law school.

In 1941 he worked as a production assistant on the film version of The Moon and Sixpence and So Ends Our Night. Two years later, in 1943, Kramer was drafted, but avoided going to war by working for an army film unit in New York. In 1948 Kramer organized an independent production company, Screen Plays Inc. His partners in the company were with the writer Herbie Baker, publicist George Glass and producer Carl Foreman, whom he had met previously during his time with the army film unit. It was during Kramer’s career as a producer that he began to receive recognition for his talent.