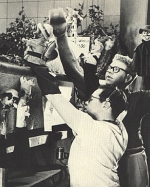 The son of a Baptist minister, Stan Freberg was born in Los Angeles and grew up in Pasadena, California. His traditional upbringing is reflected both in the gentle sensitivity that underpins his work and in his refusal to accept alcohol and tobacco manufacturers as sponsors?an impediment to his radio career when he took over for Jack Benny on CBS radio. As Freberg explained to Rusty Pipes:

Stan Freberg's first wife, Donna, died in 2000. He married Betty Hunter in 2001, and she adopted the name Hunter Freberg.

Freberg was employed as a voice actor in animation shortly after graduating from Alhambra High School. He began at Warner Brothers in 1944 by getting on a bus and asking the driver to let him off "in Hollywood." As he describes in his autobiography, It Only Hurts When I Laugh, he did this, getting off the bus and finding a sign that said "talent agency." He walked in and the agents there arranged for him to audition for Warner Brothers cartoons where he was promptly hired.