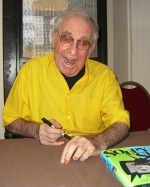 Soupy Sales was an American comedian, actor, radio-TV personality and host, and jazz aficionado. He was best known for his local and network children’s television show, Lunch with Soupy Sales; a series of comedy sketches frequently ending with Sales receiving a pie in the face, which became his trademark.

From 1968 to 1975, he was a regular panelist on the syndicated revival of What’s My Line? and appeared on several other TV game shows. During the 1980s Sales hosted his own show on WNBC-AM in New York City.

Sales was born Milton Supman, in Franklinton in Franklin County, North Carolina to Irving and Sadie Supman. His father, a dry goods merchant, had emigrated to America from Hungary in 1894. Sales had two siblings, Leonard Supman and Jack Supman. His was the only Jewish family in the town; Sales joked the local Ku Klux Klan bought the sheets used for their costumes from his father.

Sales got his nickname from his family. His older brothers had been nicknamed “Hambone” and “Chicken Bone”. Milton was dubbed “Soup Bone,” which was later shortened to “Soupy”. When he became a disc jockey, he began using the stage name Soupy Hines. After he became established, it was decided that “Hines” was too close to the Heinz soup company, so he chose the Sales, in part after comedian Chic Sale.