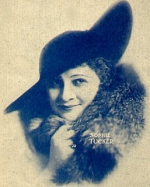 Sophie Tucker was a Russian-born American singer and actress. Known for her stentorian delivery of comical and risque songs, she was one of the most popular entertainers in America during the first two-thirds of the 20th century. She was widely known by the nickname “The Last of the Red Hot Mamas.”

Tucker was born Sonya Kalish to a Jewish family in Tsarist Russia. Her family emigrated to the United States when she was an infant, and settled in Hartford, Connecticut. The family changed its name to Abuza, and her parents opened a restaurant.

She started singing for tips in her family’s restaurant. In 1903, at the age of 19, she was briefly married to Louis Tuck, from which she decided to change her name to Tucker.

Tucker played piano and sang burlesque and vaudeville tunes, at first in blackface. She later said that this was at the insistence of theatre managers, who said she was “too fat and ugly” to be accepted by an audience in any other context. She even sang songs that acknowledged her heft, such as “Nobody Loves a Fat Girl, But Oh How a Fat Girl Can Love”.