James Loden, known professionally as Sonny James, is an American country music singer and songwriter best known for his 1957 hit, "Young Love". Dubbed the Southern Gentleman, James had 72 country and pop chart hits from 1953 to 1983, including a five-year streak of 16 straight among his 23 number one hits. Twenty-one of his albums reached the country top ten from 1964 to 1976. He is a member of the Grand Ole Opry and the Country Music Hall of Fame. James is currently retired and lives in Nashville, Tennessee.

Loden was born to Archie Loden and Della Burleson Loden, who operated a 300-acre farm outside Hackleburg, Alabama. His parents were amateur musicians, and his sister Thelma also played instruments and sang from an early age. By age three he was playing a mandolin and singing. In 1933 the family appeared on a radio audition which resulted in their being offered a regular Saturday slot on Muscle Shoals, Alabama radio station WMSD-AM. About this time the parents volunteered to raise an Alabama girl named Ruby Palmer, and soon Ruby was also part of the musical group, and the singing Loden Family was soon playing theaters, auditoriums and schoolhouses throughout the Southern United States.

To this point the musical appearances had been a part-time effort for the family, as they returned after each gig or tour to work the family farm. After a few years the father decided they were professional enough to immerse themselves into the field full-time, so the father leased out the farm and they took a daily spot on radio station KLCN, where they provided early-morning accompaniment for the area's early-risers. After that they had spots on several other radio stations around the South. In 1949 they returned to Alabama, with a show on radio station WSGN in Birmingham, Alabama. Near Christmastime that year, the two girls were married in West Memphis, Arkansas in a double ceremony and left the group. The parents found other girls to take their place, but the group soon fell apart. During the summer of 1950 James worked with a band on the Memphis, Tennessee radio station WHBQ, but that was interrupted near the end of the summer when James' National Guard unit was activated to participate in the Korean War, one of the first US groups to respond to that conflict. On September 9, 1950 his Alabama Army National Guard unit was sent to Korea, returning home in the fall of 1951. Loden was honorably discharged and moved to Nashville, Tennessee where he signed with Capitol Records with the help of Chet Atkins, with whom he had previously roomed. The company asked him to drop his last name professionally, and he released his first studio record as Sonny James.

While appearing on Louisiana Hayride he met musician Slim Whitman. James' performance on stage playing a fiddle and singing brought a strong crowd response, and Whitman invited him to front for his new touring band. James stayed with Whitman's group for two months. before returning to Nashville to make further recordings, including what became his first Top Ten country hit, "That's Me Without You". Over the next few years, he had several songs that did reasonably well on the country music charts and he continued to develop his career with performances at live country music shows. He also appeared on radio, including Big D Jamboree, before moving to the all-important new medium, television, where he became a regular performer on ABC's Ozark Jubilee in Springfield, Missouri beginning in October 1955. 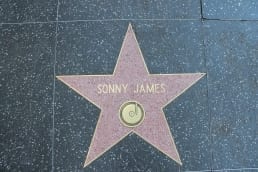