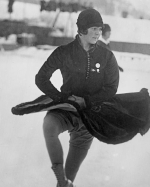 Sonja Henie was a Norwegian figure skater and American actress. She was a three-time Olympic Champion, a ten-time World Champion and a six-time European Champion. Henie won more Olympic and World titles than any other ladies figure skater. At the height of her acting career she was one of the highest paid stars in Hollywood.

Sonja Henie was born in Kristiania, current Oslo, the only daughter of Wilhelm Henie, a prosperous Norwegian furrier and his wife Selma Lochmann-Nielsen. In addition to the income from the fur business, both of Henie’s parents had inherited wealth. Wilhelm Henie had been a one-time World Cycling Champion and the Henie children were encouraged to take up a variety of sports at a young age. Henie initially showed talent at skiing, and then followed her older brother Leif to take up figure skating. As a girl, Henie was also a nationally ranked tennis player and a skilled swimmer and equestrienne. Once Henie began serious training as a figure skater, her formal schooling ended. She was educated by tutors, and her father hired the best experts in the world, including the famous Russian ballerina Tamara Karsavina, to transform his daughter into a sporting celebrity.

Henie won her first major competition, the senior Norwegian championships, at the age of 9.

She then placed eighth in a field of eight at the 1924 Winter Olympics, at the age of eleven. During the 1924 program, she skated over to the side of the rink several times to ask her coach for directions. But by the next Olympiad, she needed no such assistance. Henie won the first of an unprecedented ten World Figure Skating Championships in 1927 at the age of fourteen, and her first Olympic gold medal the following year. She also won six consecutive European championships. Towards the end of her career, she began to be strongly challenged by younger skaters including Cecilia Colledge, Megan Taylor, and Hedy Stenuf. However, she held off these competitors and went on to win her third Olympic title at the 1936 Winter Olympics, albeit in very controversial circumstances with Cecilia Colledge finishing a very close second. Indeed, after the school figures section at the 1936 Olympic competition, Colledge and Henie were virtually neck and neck with Colledge trailing by just a few points. As Sandra Stevenson recounted in her article in The Independent of the 21st April 2008, “the closeness infuriated Henie, who, when the result for that section was posted on a wall in the competitors’ lounge, swiped the piece of paper and tore it into little pieces. The draw for the free skating came under suspicion after Henie landed the plum position of skating last, while Colledge had to perform second of the 26 competitors. The early start was seen as a disadvantage, with the audience not yet whipped into a clapping frenzy and the judges known to become freer with their higher marks as the event proceeded. Years later, a fairer, staggered draw was adopted to counteract this situation”.