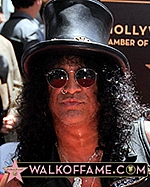 In celebration of the star dedication, Slash performed at a private acoustic performance and exclusive Q&A with Myles Kennedy at Hard Rock Cafe Hollywood Blvd. after the ceremony. Fans were given the opportunity to win tickets to the exclusive show by listening to KLOS 95.5.  Along with family and friends the following celebrities were on hand for the celebration: Clifton Collins Jr., Steven Adler, Gilby Clark, Duff McKagen of Guns N’ Roses.

As a musician, artist, philanthropist, and iconic rock figure, the Grammy-winning, Rock and Roll Hall of Fame inductee Slash has left a lasting imprint on the world that cannot be measured in a few short words. His trademark sound is as original as it is unmistakable. His body of work has given us some of rock's greatest anthems. From television and radio to professional sporting events, his music continues to provide a soundtrack for life.

Throughout his career, Slash has amassed album sales nearing an astounding 100 million copies along with a Grammy Award for “Best Hard Rock Performance” with Velvet Revolver for their single “Slither.” With seven Grammy nominations, along with countless other accolades, accomplishments and acknowledgements, Time magazine named Slash #2, behind Jimi Hendrix, on its “The Ten Best Electric Guitar Players of All-Time.” Slash’s self-titled biography critically well-received, climbed the bestseller list in both the U.S. and U.K. hitting #8 on the NY Times Bestsellers list. Guitar Hero used Slash's image and music, producing an installment that shattered previous gaming records by selling more than $100 million in its first week of release and reaching over $800 million in total sales while opening the floodgates to a whole new generation of fans.

Never satisfied with resting on past laurels, Slash continues to evolve as a musician and an artist. Slash and his band featuring lead singer Myles Kennedy, drummer Brent Fitz and bassist Todd Kearns aka The Conspirators have just released their new album APOCALYPTIC LOVE (May 22). APOCALYPTIC LOVEhas stormed onto the BillboardTop 200 Albums Chartat #4, marking the top rock debut for that week. The disc is also #1 Independent Albums Chartand #1Hard Music Albums Chart. All songs on APOCALYPTIC LOVEreleased on Slash’s own Dik Hayd International, and distributed through EMI Label Services were written together by SlashandMyles Kennedy as they spent the last two years on tour all over the world. In addition, APOCALYPTIC LOVEis also Top 5in sevencountries outside the U.S. Critical acclaim is pouring in for the album and its hard-driving first single “You’re A Lie,” Revolver magazine declared “Apocalyptic Loveis at heart a collection of lean, high-octane rock-and-roll tunesbuilt to be blasted out of open-top sports cars or, more suitably, open-air stadiums” (July 2012). The  Los Angeles Times added, “Fans of his work in GNR and Velvet Revolver will find much to embrace in the album’s 13 tracks, ranging from the sneering rock hooks of ‘You’re a Lie’ and the heavy metal grind of ‘Halo’ to the extended instrumental passages on ‘Anastasia.’” Elsewhere, Rolling Stone.com hailed “the album is filled with head bangers and plenty of fancy fretwork, most notably on standout tracks like ‘Hard and Fast’ and ‘Standing in the Sun’” (May 20, 2012). Slashand his band are currently on the road performing sold-out shows across the country and overseas. For up-to-date information, visit: www.slashonline.com.

Slash has performed for both royalty and Heads of State including the Queen of England and President Clinton. He has recorded and shared the stage with music's luminaries as diverse as Michael Jackson, Bob Dylan, James Brown and Ray Charles. As musical director at the 2005 Grammy Awards telecast, Slash led Stevie Wonder, Bono, Brian Wilson and Steven Tyler from Aerosmith through a stirring rendition of The Beatles' classic "Across The Universe."

His pursuit of new creative outlets–another reason for the continued success and vitality throughout his 28 year career–includes the development of an animation series, a scripted TV series, internet projects and the creation of Slasher Films a horror Film & TV production company formed by Slashin partnership with Michael Williamsand Rob Ericof Scout Productions.

He was nominated for another Grammy Award for his impassioned interpretation of “The Godfather” theme, from the soundtrack for the film The Kid Stays in the Picture, a documentary about celebrated film producer and his long-time friend, Robert Evans. At the invitation of film producers and directors, Slash began scoring music for feature films as well as writing and recording for soundtracks. His compositions can be heard throughout the award-winning bio film Ray. He has also worked on several Quentin Tarantino films, including Jackie Brown and Curdled. His list of song credits runs the gamut from comedy to action, among them box-office blockbusters such as The Hulk, Terminator 2,Judgment Day and Big Daddy.

Slash and his wife Perla are longtime supporters of the Los Angeles Youth Network, which provides shelter and emancipation support for more than 10,000 runaway and homeless youth on the streets of Los Angeles every night. To raise awareness for the plight of homeless youth, Slash and a handful of actors including Amanda “AJ” Milchalka (“Hellcats,” Super 8), Kristin Bauer (“True Blood”), Clifton Collins Jr. (Traffic, Capote) and Judd Nelson (The Breakfast Club) donated their time to create a special video for the Los Angeles Youth Network (LAYN) with Slash’s song “Gotten” featuring Adam Levine of Maroon 5 on vocals, from Slash’s previous 2010 debut solo album. To watch, donate and download “Gotten,” click here: http://slashonline.com/gotten.

For more information and to view who shares a star on the Hollywood Walk of Fame, visit www.walkoffame.com. 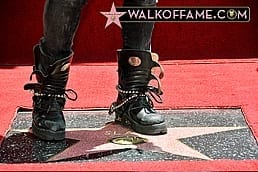